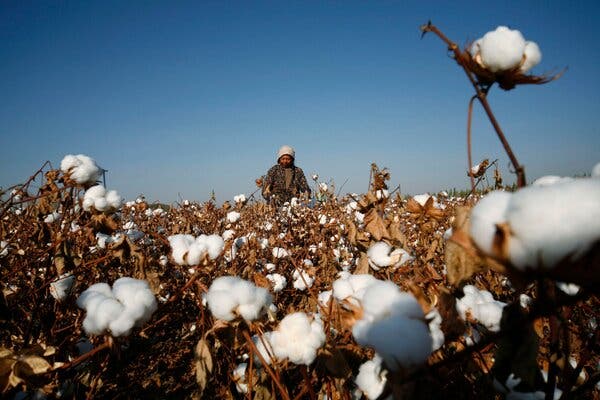 As the diplomatic relationship between China and the US are taking a downward fall, the trade deals between the two nations are also getting affected.

After banning several Chinese companies from operating in the US, now the US Customs and Border Protection (CBP) has decided to to block imports of cotton and tomato products from western China’s Xinjiang region.

However, the reason behind this decision is not the falling diplomatic relations but the inhumane actions from the Chinese side in the production. It has been alleged that the production of cotton and tomato products in the Xinjiang region is done through forced labour.

The announcement, which was to be made on Tuesday, has been postponed due to “scheduling issues”. However, according to unofficial announcements and local reports, it has been reported the CBP is readying orders to stop the import of tomatoes, cotton, tomato paste, cotton yarn, textiles and apparel.

The decision has been taken after the United Nations claimed to have credible reports and proof that around one million Muslims have been detained in camps in the region, where they are put to work forcefully and are treated in an inhumane manner with very limited resources.

However, China, irrespective of the pressure imposed by the west, has denied all allegations and has continuously declared that the camps are vocational training centers needed to fight extremism.

“We have reasonable but not conclusive evidence that there is a risk of forced labour in supply chains related to cotton textiles and tomatoes coming out of Xinjiang,” CBP Executive Assistant Commissioner Brenda Smith. “We will continue to work our investigations to fill in those gaps.”

Although no official announcement has been made yet, the “Withhold Release Orders” allow the CBP to detain shipments based on suspicion of forced-labour involvement under long-standing US laws aimed at combating human trafficking, child labour and other human rights abuses.

As per an order cited by a local news company, CBP has stated that the forced labour in the regionincludes “debt bondage, unfree movement, isolation, intimidation and threats, withholding of wages, and abusive working and living conditions.”

The ban can have a negative effect on the US retail industry as China is one of the biggest cotton importer for the US as the Asian country produces about 20 per cent of the world’s cotton and most of it comes from Xinjiang.

Later, in July, Washington issued an advisory warning companies operating businesses out of or with resources from Xinjiang, or with entities using Xinjiang labour. The lawmakers warned these companies that they could be exposed to “reputational, economic, and legal risks”.