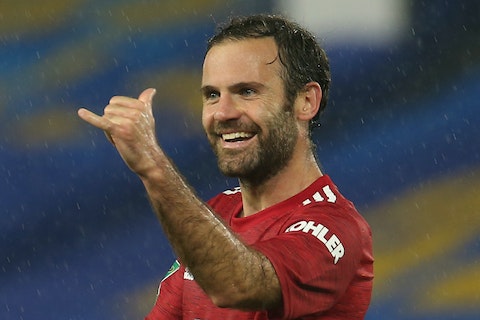 Juan Mata played a direct part in two goals in Manchester United’s win over Brighton and was subjected to praise by Ole Gunnar Solskjaer.

Ole Gunnar Solskjaer is “never surprised” to see Juan Mata take control of matches after the midfielder scored one and set up another in Manchester United’s 3-0 EFL Cup victory over Brighton and Hove Albion.

Mata picked out Scott McTominay from a free-kick for United’s opener in Wednesday’s last-16 tie before profiting from a brilliant Donny van de Beek assist to bring up his 50th goal for the club.

The 32-year-old also scored in the third-round win over Luton Town and has now been directly involved in 13 goals in his last 15 starts for United.

He has not been part of Solskjaer’s squad for the opening two rounds of Premier League fixtures, but the United head coach is happy with the Spaniard’s latest contribution in the cup competitions.

“It was a great performance by Juan Mata,” Solskjaer told Sky Sports. “He was the one who got on the ball and calmed us down. He was composed.

“He more or less creates the first goal himself. I am never surprised when he plays like this.

“He has been around the block and knows football. He does his work and is at the back stick to shield the ball from Dan Burn at a corner in the second half.”

Victory for United was their third in a row in all competitions, four days on from snatching a last-gasp 3-2 win over Brighton at the same venue in the Premier League.

Paul Pogba rounded off the scoring for United 11 minutes after being brought off the bench in a morale-boosting win for Solskjaer’s side following some below-par performances to begin the campaign.

“We needed the first 20-25 minutes to get our confidence and get on the ball. We have worked on set-pieces. You keep a clean sheet and this is important for a back four,” he said.

“We wanted to bring on Pogba for 25-30 minutes for a workout. The game was there for him. Paul and Marcus [Rashford] found some good positions.”

United continue to be linked with Jadon Sancho – left out of Borussia Dortmund’s squad for Wednesday’s 3-2 DFL-Supercup loss to Bayern Munich because of illness – with five days of the transfer window to go.

And while remaining tight-lipped on speculation that United have had another bid knocked back, Solskjaer is confident his bosses are doing all they can to bring in additional quality.

“I can’t give you any news,” he said when asked directly about the Sancho situation. “We are working with what we have got. We have a big squad.

“We changed 10 players from Saturday. If there is any update, we will let you know. I don’t comment on other teams’ players. I can’t concern myself with other clubs.

“I know the club is working well and hard to have a strong squad as possible. Sometimes speculation is there and we can’t control that.”