A popular blogger, Gistlover has alleged that the Ooni of Ife, Adeyeye Ogunwusi has secretly welcomed a new baby with another woman.

This is coming a few months after Prophetess Naomi Silekunola, the Ooni of Ife’s wife, Oba Adeyeye Ogwunsi, on 15th April, turned a year older, and a dinner party was held in her honor at the palace.

A video that emerged online captured the moment the queen was eulogizing her husband and jokingly prayed for the monarch to have more queens while she was giving her vote of thanks.

According to the popular Instagram blog, Gist Lover, the Ooni of Ife has wives living in the place with him asides from the Queen and the baby was birth by one of them.

The blog claims thus below:

“According to our source, the Ooni of Ife has 3wives in the palace and they want to keep it off social media as Naomi is the only one allowed to use social media as the Queen of Ooni, all other wives were warned severally to meshionu (keep shut). Queen Naomi has not been finding it easy either as she battles several side chics of the King from all angle…All of us at GLB celebrate with the Ooni of Ife on the arrival of his newborn. I come in peace.” 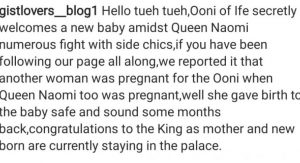 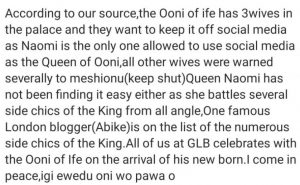