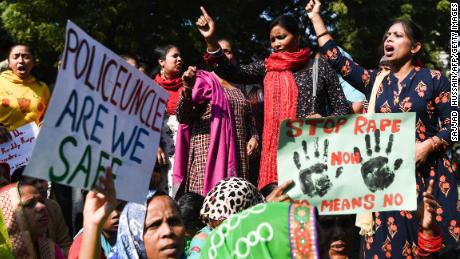 A Hindu priest and two of his male followers have been arrested for the alleged gang rape and murder of a 50-year-old woman in India’s northern Uttar Pradesh state, local authorities said.
Police arrested the priest on Thursday night for the alleged rape and murder, which took place at a temple in the Budaun district on Sunday, according to district magistrate Kumar Prashant.

The two other men — who are “disciples” of the priest — were arrested on Wednesday, Prashant said.
“(The victim) had gone to a temple in the neighboring village and that is where the (alleged) rape occurred,” said Prashant, adding that the three accused men left the victim’s body outside her home around midnight.
“The family frequented the temple so the accused knew where the victim lived,” Prashant said.

The priest was arrested in a hut in a forest near his village, after the police received reports that he was hiding there, according to Prashant.

The accused claimed that the victim had fallen into a well, and they helped her out and dropped her home while she was alive.

However, the family stated that the woman was already dead when they found her body outside their home, Prashant said, citing Budaun police.

“According to the post-mortem report, she died due to shock from excessive internal bleeding and her rib was fractured … she also had injuries and lacerations to her private parts,” Prashant said.
All three men have been accused of gang rape and murder, senior district police official Sankalp Sharma told reporters Wednesday.

The maximum penalty is death for murder and life imprisonment for gang rape.
Budaun police have also launched an internal inquiry at the Ughaiti Police Station, where the victim’s village is located, after local officers failed to immediately register the family’s complaint, Sharma said. The officer in charge of the police station has been suspended.

In a statement criticized by the organization’s own head, a member of the National Commission for Women (NCW), who visited the victim’s family, said that the incident may not have happened had the woman not been out alone after dark.

“I think if the woman had not gone out at night or if some family member had been with her then perhaps the incident would not have occurred,” Chandramukhi Devi told reporters on Thursday. She has since retracted her comments.

It's not @NCWIndia 's view and I strongly condemn it. https://t.co/vspd6AqZ4u

The Chief Minister of Uttar Pradesh, Yogi Adityanath, said on Wednesday that “stringent legal action will be taken.”