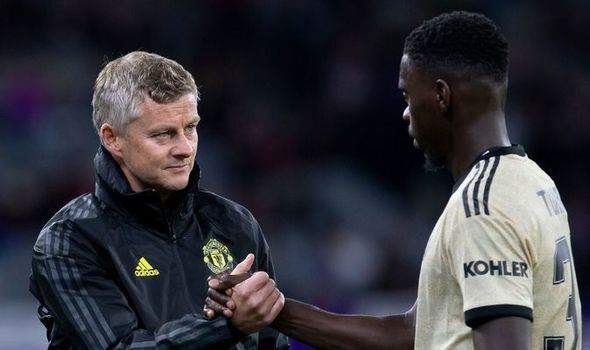 The Red Devils beat Aston Villa 3-0 in the Premier League but the manager and midfielder want to see more from their side
Ole Gunnar Solskjaer has encouraged his Manchester United squad to listen to Paul Pogba’s advice to push on to the next level.

Man Utd extended their unbeaten run to 17 in all competitions with a 3-0 win against Aston Villa making Premier League history as they became the first team to win by a three-goal or larger margin in four consecutive games.

While there were plenty of positives to take from the Villa Park display, Pogba, who scored the third of the night, warned their records won’t count for anything if they don’t push on to win the Premier League.

“We are really pleased with ourselves but know we have to carry on,” Pogba told Sky Sports.

“We talked before the game, we talked in training that we have to carry on, that’s what Manchester is, it’s a big club and we want to keep the level up always, and the performance today and in the last few weeks, they are very good and they are at the standard of Man Utd.

“We didn’t win the Premier League, that’s the goal, and we didn’t win anything this year so we have to keep working, there’s lots to do. A lot.”

And Solskjaer agreed with the midfielder and said those words need to be taken into the dressing room.

“I’m sure Manchester United will mount a challenge and get back to winning the league,” Solskjaer said. ”

When that’s going to happen is up to every single one who’s here and how quickly we can make this process go, we’re developing as a team, improving and we’ve come a long way in one season so let’s take Paul’s word into the dressing room and expect and demand more every single day.

Despite another fine attacking display and another three goals the Norwegian wants to see more from his forwards and believes they should have scored far more goals over the past two fixtures.