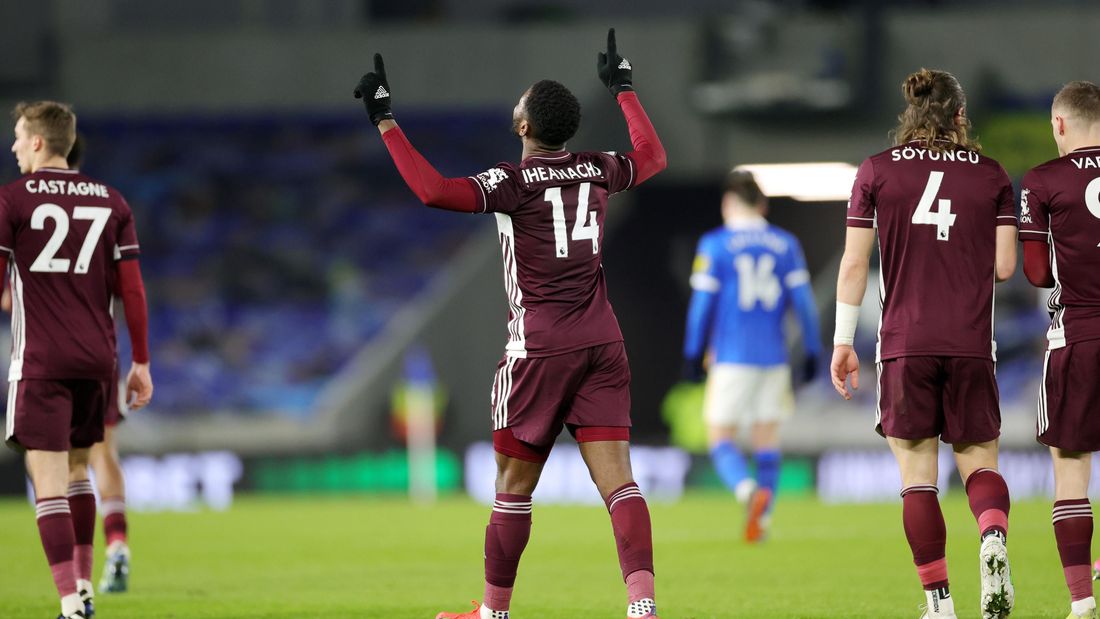 The Foxes secured a comeback victory over the Seagulls in Saturday’s English top-flight fixture, with the Nigerian among the goalscorers

Having been pegged back by Adam Lallana’s 10th minute strike, Brendan Rodgers’ team bounced back to record their 16th win of the 2020-21 campaign.

The Nigeria international levelled matters for the Foxes in the 62nd minute – lifting the ball past goalkeeper Robert Sanchez – after receiving a pass from Youri Tielemans.

In the 87th minute, Ghana international Daniel Amartey sealed all points at stake for the King Power Stadium giants with his second English elite division goal, and first in 1540 days since netting against Stoke in December 2016.

Speaking to club’s media men after the game, the former Manchester City forward spoke of their desire to win, which inspired their comeback in the last 45 minutes at the Falmer Stadium.

“We’re all delighted and happy,” Iheanacho told LCFC TV. “It was a little bit poor in the first half, but we came back in the second half.

“We had hunger in the second half, and we did the job. We came back, we equalised, and we got the win.

“I’m happy! I’m happy with the goal. I was composed and I just dipped it over the ‘keeper, so we’re happy.”

He also shed more light on his role against Graham Potter’s team following his partnership with 2019/20 Golden Boot winner Jamie Vardy, while reiterating Leicester City’s desire to avoid a slip from the second position.

“The manager said I can drop deep to get the ball,” he continued.

“Sometimes, I can make runs off Vards’ shoulder as well, so it’s a really good role for me to play.

“I like playing alongside Jamie. It’s working great for us.

‘They are not going to fly’ – Managers on international break

“We need to get back now, work hard in training and in games, we need to show that we want it more than other teams.

“At the end of the season, we’ll see where we are. I’m happy with the way I’m playing. I just need to keep working hard and we’ll take it one game at a time and see how it goes.”

Leicester will welcome Sheffield United to the King Power Stadium next weekend as Brighton travel to Southampton.

“Your present, past, and future generation can’t have same” – Kcee slams troll over his career 1 min read