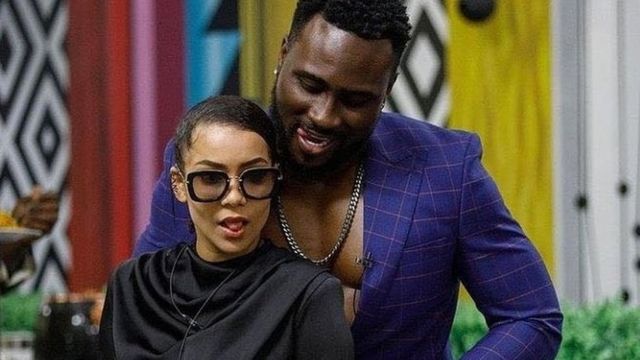 Viewers have opined that Pere ruined Maria’s game after he made a request to Biggie that his girlfriend should be present at the end of the reality TV show.

Recall that before Maria was evicted, she and Pere were vibing together and he also asked that they be in a relationship together.

It was earlier reported that Pere had requested that his girlfriend who’s outside of the house should be present on the last day of the show.

Reacting to this, many have dragged Pere accusing him of being the reason Maria was evicted.

“He ruined Maria’s game by poisoning her mind against other housemates who loved her. Chaii wicked pple everywhere. So he has girlfriend. Too bad”.

“You guys should be using your head maria and pere were never in a relationship… I don’t know why some people are saying maria was used..maria told pere to his face that she has a boyfriend outside”.

“You People should leave Pere. Maria came to BBN 6 as a Single person, when Pere started chasing her, she said, “I have a Boyfriend” and didn’t want to explore further.
Pere once mentioned he has a girlfriend outside and doesn’t know how she’ll take the thing he had with Maria.
Pere didn’t wrong Maria in any way, they were both playing the Game. He even got a strike because she asked him to remove Microphone, so please free the guy Abeg.”