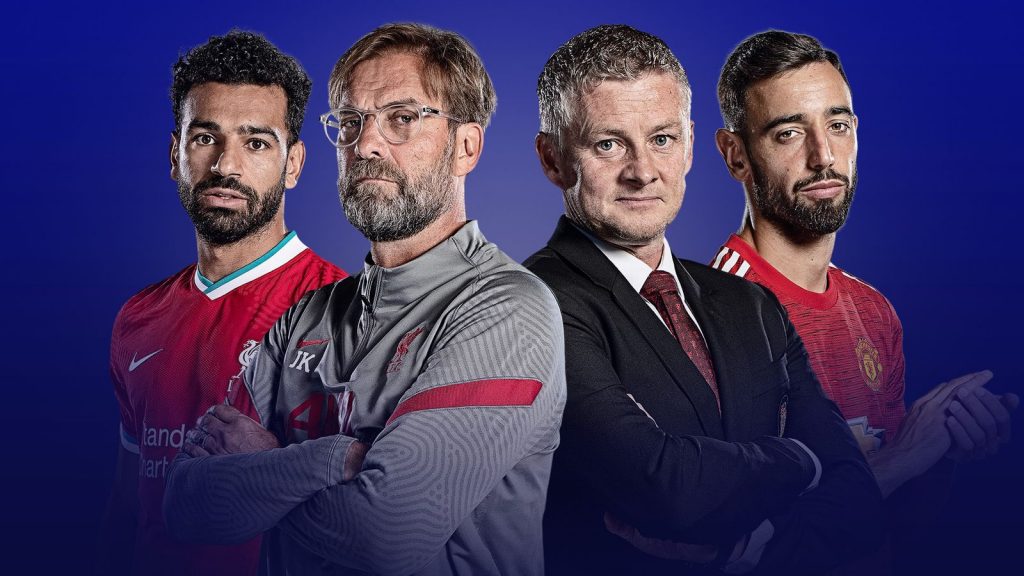 When Liverpool and Manchester United clash at Anfield on Sunday, there will be more at stake than just the usual bragging rights.

The bitter rivals are engaged in a battle for the Premier League title, with leaders United sitting three points clear of second-placed Liverpool.

Here is a closer look at three duels – from goals and crosses, to set-pieces, penalty banter, injuries, pressing, high lines, running, possession, scoring late, and conceding early – that will define the vital showdown:

Bruno Fernandes has played a major role in transforming Manchester United from also-rans to title contenders.

Widely credited with reviving United with his fierce will to win and positive attitude, as well as his classy performances, the Portugal playmaker’s next mission is to stamp his authority on the biggest game of his time with Ole Gunnar Solskjaer’s side.

Fernandes, signed from Sporting Lisbon last January, will head to Anfield as the first star to win the Premier League Player of the Month award four times in a calendar year after earning the prize for December.

Overall, he has 15 goals and nine assists in all competitions this term, making it 27 goals and 17 assists in 48 United appearances.

No wonder Liverpool boss Jurgen Klopp is a huge admirer and will task Reds captain Jordan Henderson with subduing the midfielder on Sunday.

“He’s an outstanding player. Before he joined United, we played against Sporting in the USA on the tour and in that game already you could see, ‘Wow!’,” Klopp said.

“He is settled, he is a very influential player for United obviously, involved in a lot of things. So, yeah, a good signing, unfortunately, for United.”

With 17 goals in all competitions this season, Mohamed Salah will pose the biggest threat to United, but the Egypt forward can expect a stern challenge from the revitalised Eric Bailly.

Bailly has struggled for form and fitness throughout his United career, but the Ivory Coast centre-back has been key to their winning streak.

In six games with Bailly in the team, United have won five and drawn once, conceding just three goals.

United manager Solskjaer could also revert to the three-man central defence he has deployed against Liverpool in the past.

Salah, Sadio Mane and Roberto Firmino are a formidable test for United’s rearguard, although they have gone through a barren patch of late, with Liverpool netting only once in their last three league games.

Ravaged by injuries to his top centre-backs, Klopp will be forced to deploy Brazil midfielder Fabinho as a makeshift defender once again.

Virgil van Dijk and Joe Gomez are long-term absentees, while Joel Matip has spent the last week battling to return from the adductor injury the last three games.

Matip has returned to training but if he is not deemed ready then Klopp will have to choose between youngsters Rhys Williams and Nat Phillips to partner Fabinho.

That puts the onus on Fabinho to maintain his solid form at the position, but it won’t be easy against a lively United attack led by Marcus Rashford.

Rashford and Anthony Martial have the pace and poise to hurt Liverpool, while Edinson Cavani’s experience and physical presence make him an intriguing option.

“We know that we can beat anyone, anywhere on any given day, so to go into a game like this feeling that if we play to our best we can win is a good feeling,” Solskjaer said.

“It’s a test and reality check of where we’re really at because we’ve won many, many tight games, scored a few goals in injury time, showed that mentality.”

Goals, shots and through balls – The general narrative appears to suggest United are fortunate to go into this fixture at the summit, or even close to it, but they certainly deserve to be among the higher rungs – ranking second for goals scored and shots on target, behind only Liverpool.
Both sides are also among the most prolific for threading balls between defensive lines, so expect intricate passes or exchanges with runners and breakaway attacks this weekend.
As has been the case for several seasons, Liverpool’s top scorers are Mohamed Salah and Sadio Mane, while midfield maestro Bruno Fernandes and winger Marcus Rashford lead the way at United this term.

Man Utd score late, both concede early – Rashford’s late winner at Wolves was just the latest example of United striking in the final moments of games this season. They also scored stoppage-time goals to grab points against Southampton and Brighton. The graphic below also shows how they have scored 21 of their 34 goals in the second half, equating to 62 per cent.

That is not the case for Liverpool, who have scored in equal measure during both halves. However, both teams have been prone to conceding early this season.

Klopp’s side have conceded 14 of their 21 goals in the first half – although the majority of these came during the opening eight fixtures and they still managed to secure wins in most of those games.