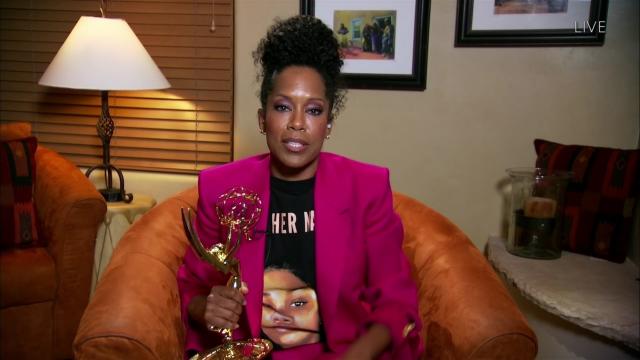 The 72nd Emmy Awards may have looked a little different on Sunday, but they still served as a platform for artists to call for social justice. Several of the winners also used their brief time on screen to remind viewers to vote in the upcoming election.

Following several high profile instances of police brutality and a public outcry for the victims of racism and injustice, some winners wanted to make their opinions heard. Winners Regina King and Uzo Aduba both wore shirts honoring Breonna Taylor, who was shot in her home by police. They also called for people to register and vote.

Host Jimmy Kimmel and Anthony Anderson chanted “Black Lives Matter.” And Mark Ruffalo, who won for his performance in I Know This Much Is True, used his acceptance speech to make an impassioned plea for social justice reform.

“We have a big, important moment ahead of us,” said Ruffalo. “Are we going to be a country of division and hatred, a country for only a certain kind of people? Or are we going to be one of love, strength, and fighting for all of us, who have the American dream and the pursuit of life, liberty, love, and happiness, in this great country of ours?”

Schitt’s Creek star Dan Levy was thrilled with Emmy voters, as his show won the first seven awards. But he made it clear he’d really be thrilled with voters who show up in November.

“Our show, at its core, is about the transformational effects of love and acceptance,” said Levy. “We need it now more than ever before. If you have not registered to vote, please do so, and then go out and vote. That’s the only way and we need love and acceptance out there!”

And while there were several impactful speeches delivered by winners, Succession creator Jesse Armstrong may have been the first recipient to ever un-thank people.