Soldiers carry electoral material at a polling station ahead of Ecuador's presidential election on February 7, in Quito, February 6, 2021. REUTERS/Johanna Alarcon 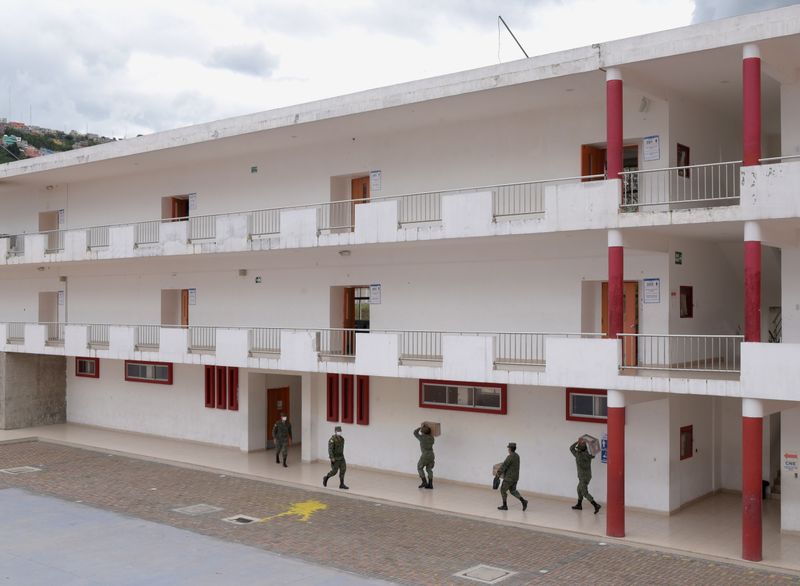 Ecuadoreans choose a new president on Sunday, with many voters weary of painful economic austerity measures and eager for a return to socialism, encouraging left-wing candidate Andres Arauz who hopes to win without needing a runoff vote.

The 36-year-old economist, a protege of former president Rafael Correa, leads in polls on promises to make $1 billion in direct cash payments to families and to disavow the conditions of a $6.5 billion IMF financing package.

His main rival, Guillermo Lasso, has been hurt by his image as a conservative banker, and pollsters say the possibility of low voter turnout due to the pandemic could dent his support. Lawyer and indigenous activist Yaku Perez is third in the polls.

An Arauz victory would extend Latin America’s return to leftist policies, already evident in Argentina and Bolivia, a challenge for Washington as it duels with China for influence in the hemisphere.

“The response of citizens has been overwhelming all over the country, and we know that this will be reflected in the vote,” Arauz said in Quito, where he accompanied his 106-year-old grandmother Flor Galarza as she voted.

Arauz is not casting his ballot in Sunday’s election because he is registered to vote in Mexico, where he was studying to get doctorate in economics but abruptly quit the program to run for president.

President Lenin Moreno, a former Correa ally, drove a pro-market agenda on hopes of reviving a sluggish and heavily indebted economy. His efforts sparked an angry backlash, with 10 days of violent street protests in 2019 against a planned fuel price hike.

The elections council said it expected relatively high participation, and acknowledged that lines were long in some centers due to social distancing.

Jomaira Alvarado, 28, a Guayaquil merchant who supports Lasso, complained about inadequate measures to guard against transmission of the virus.

“I came worried about getting infected with the pandemic, but here I am,” said Alvarado at a voting center. “I have a lot of hope that we can finally eliminate the shadow of these bad governments.”

Pollsters in recent days have started to see a slightly greater likelihood of Arauz winning a single round. Arauz allies are expected to make a strong showing in voting for a new legislature.

Financial markets are watching, and Arauz’s rhetoric has already sparked a bond selloff.

He has said he will continue paying the country’s debts, but has said social investment will take priority and also has called for an investigation of last year’s $17.4 billion bond restructuring.

Last month, Ecuadorean bonds were the worst performers among the JPMorgan EMBI Global Diversified index, with a -15% total return.

To win in a single round, Arauz needs more than 50% of valid votes, or 40% total with 10 percentage points more than the runner-up. Otherwise, a runoff vote will be held on April 11.

Perez, third in opinion polls, is running on an anti-mining platform, vowing to protect watersheds from pollution.

Also, the city of Cuenca will vote in a referendum on whether to ban mining around any of the rivers that go through the city. This could spook mining companies already contending with opposition from indigenous activists.