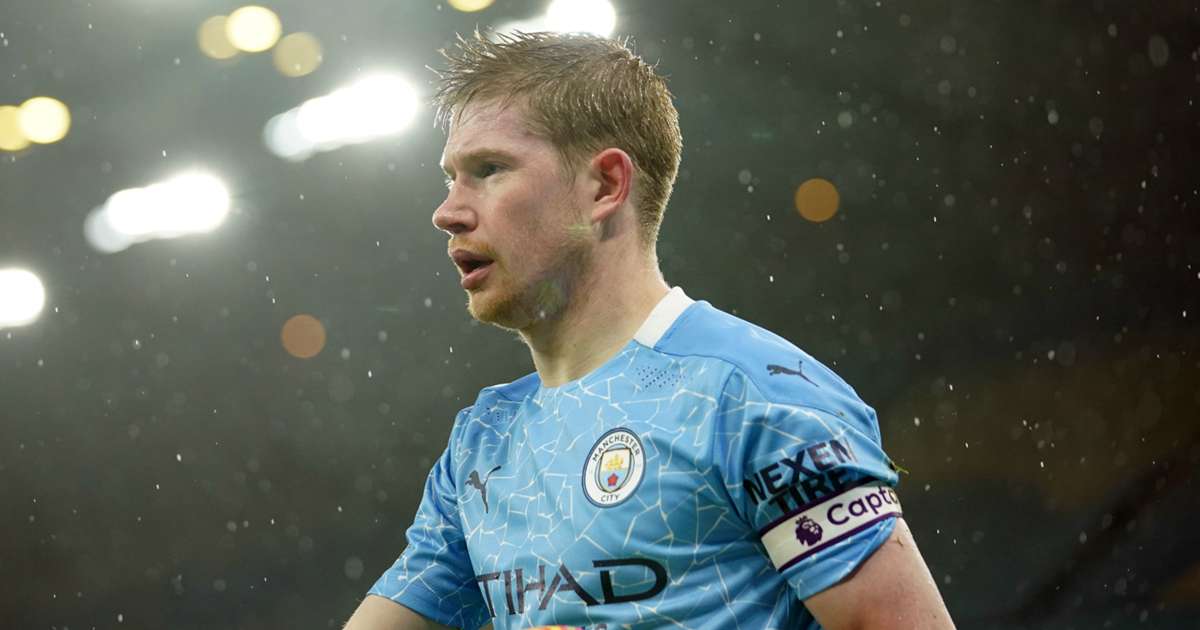 Manchester City will be without Kevin De Bruyne when they travel to Anfield to face Premier League champions Liverpool next month.

Manchester City will be without influential midfielder Kevin De Bruyne for between four to six weeks, manager Pep Guardiola has confirmed.

De Bruyne, the reigning PFA players’ player of the year, has been in magnificent form again for City this season, scoring three goals and supplying 10 assists in the Premier League.

Guardiola’s side are on a six-match winning run in the league, a streak that leaves them well placed in the title race – two points behind leaders Manchester United with a game in hand.

But De Bruyne was forced off after an hour of Wednesday’s hard-fought 2-0 win over Aston Villa and, speaking ahead of Saturday’s FA Cup trip to League Two Cheltenham Town, Guardiola outlined the extent of the Belgium international’s hamstring injury.

“Kevin, like the doctor said today after a scan yesterday, will be between four and six weeks out,” he said.

There was better news for right-back Kyle Walker, who is expected to return after the weekend having sustained a blow to the hip in the Villa game, but attention understandably fell upon De Bruyne, who will now miss a potentially crunch trip to take on faltering champions Liverpool at Anfield on February 7.

The playmaker faces a race to be fit for the first leg of City’s Champions League last-16 match against Borussia Monchengladbach on February 24, and Guardiola rued his injury as a consequence of a congested fixture schedule.

Not for the first time this season, Guardiola took aim at the Premier League vote that elected not to increase the number of substitutions allowed during games from three to five – a move at odds with other major competitions in Europe.

“It is [a huge blow] but we have to move forward,” Guardiola said.

“He has an important part of the season out and we have to find a solution. Everyone is struggling in the situation we are living and we have to adapt.

“When you compete in all the competitions it is important to have all the players healthy, but this is impossible.

“There are injuries at all the clubs. We knew it was going to happen, we tried to avoid it, we had more medical treatment than ever, more nutritionists than ever, we try to masseur as much as possible but they are human beings.

“This amount of competitions, at the end the bodies of the players says ‘enough’.

“When we demand five subs, it’s for this reason. Why can we do it [have five substitutes] in the FA Cup but the Premier League we cannot?

“The Premier League voted, but if they want to protect the players… I’m not saying because it’s Kevin, it’s many. More than ever.

“It’s too many games, too many competitions and, in the end, the players suffer. You want to play without Kevin De Bruyne for five, six weeks? Okay, the spectators will miss an incredibly top player, like in other teams. But it is what it is.”