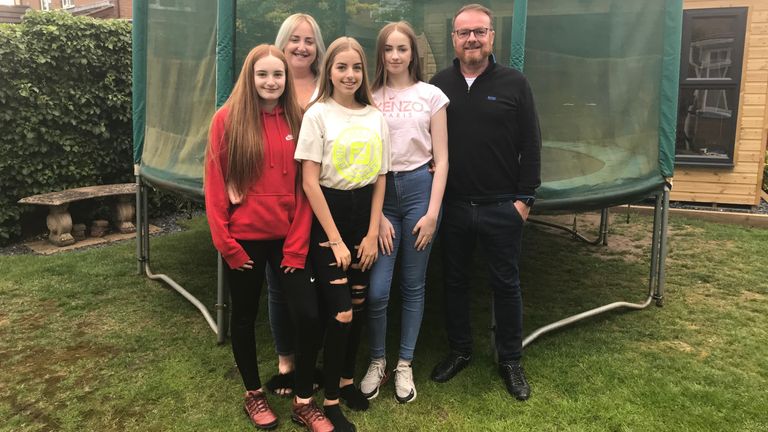 Darren Buttrick says he was scared to go to sleep in case he stopped breathing after battling coronavirus.

Darren Buttrick, 49, caught coronavirus in March and became so ill that doctors told him to call his family to say goodbye.

The father-of-three, from Coven in South Staffordshire, was put into a coma on a ventilator – but miraculously pulled through.

Now, he is donating his blood plasma to help other COVID-19 sufferers – and has become the most prolific donator in the UK, taking part seven times.

Three days before lockdown in the UK, I was being rushed to New Cross Hospital in Wolverhampton.

The doctor said they would run a blood gas test which would determine what was happening with my blood and oxygen. She came back and said it was not good, but they would repeat it just to be sure.

I was laying on the hospital bed upset, frightened and fearing I would not be allowed home.

A short while after, the second test came back and it was exactly the same as before.

The doctor told me it was so bad that I would need to go to the intensive care unit (ICU), be put in an induced coma and ventilated.

I could hardly speak but I told her I didn’t want that.

“Just give me oxygen,” I said.

But the doctor replied: “I am afraid to say you are beyond that. Your body is struggling and will start to shut down so we need to act now to save you.

“There are still risks as we don’t know what we’re dealing with, but you are poorly and we promise to do our best.”

She said I had 15 minutes to call my loved ones and tell them what was about to happen.

“We will be doing everything possible to save you, but you need to understand this could go either way and you need to say what you need and want to say to your loved ones – this could be your last call,” the doctor said.

I cried, I sobbed, and I begged. I could not believe it was this bad and I was facing the unknown – possibly even death.

I had no underlying health conditions and I went to the gym, even recently hiring a personal trainer.

The doctor reassured me and said they would do everything possible to save me and I had age and my previous good health in my favour.

I called my wife, parents, brothers, sister and some friends. They were the worst calls I have ever had to make.

My wife broke down and surely had not expected this call. My parents were crying and in disbelief – they said they did not want to let me go before them.

A work colleague told me: “Darren, fight for your life, we are fighting for you.”

One of my daughters had no idea about the severity of my illness and said: “Dad, please have a nice sleep and come back soon.”

My wife clearly told them I had been put to sleep to help me get better. That message still breaks my heart today when I read it.

I was pushed on a trolley to an anaesthetic room and told what would happen and what the risks were.

I continued to cry and begged the doctors not to let me die.

There were three NHS workers there and one of them, called Kate, held my hand and stroked my arm as I was put in an induced coma.

I thought to myself: this could be it and I may never wake up.

Then I counted to three.

I later found out that while I was in the coma, a nurse called Sergio would sit with me and tell me about how my wife had called and passed on her love.

Hearing that now makes me cry and realise how much the nurses and doctors went above and beyond to support me.

After about five days in the ICU, I had started to improve.

They tried to take me off the ventilator, but I had a bad reaction and they had to sedate and re-ventilate me.

Once the sedation had worn off, I woke and immediately put my hand to my mouth to try taking out this thing that felt like a brick in my throat.

A nurse told me to stop and reassured me that I was okay. As I looked around, I saw lots of nurses and doctors fully gowned, head-to-toe in PPE.

At least 10 other patients were around me laying on their backs in a coma, on ventilators, with machines bleeping continually.

The next two days were tough. I didn’t feel like I slept. The clock was next to me and I watched every minute pass.

I was frightened, not well and in discomfort.

One night, I woke up very agitated, but there was a wonderful nurse called Dawn sitting next to me and holding my hand.

She told me not to worry – that I was off the ventilator and on oxygen and was through the worst.

Dawn let me Facetime my wife and it was so emotional.

Eventually, the nurses had me eating again (jelly and ice cream!) and using a Zimmerframe.

I was sent to a high dependency ward, and two days later I came home.

For the next two weeks, I rested and gradually built up my strength and mood.

But I would go to bed at night and say a prayer to myself.

“Please God, let me wake up in the morning,” I would say.

I hated closing my eyes and going to sleep because I feared my breathing would stop, and I would be gone.

At the end of April, I received a call from the NHS asking if I would be willing to take part in plasma donations.

They explained how I would be helping them and others with this trial. It was a no-brainer for me – I had been saved and now wanted to give back.

I went to the NHS Blood and Transplant Building in Birmingham and it was a good experience – it didn’t hurt.

They said I was only the second person to have donated COVID-19 antibodies to them.

I have now donated seven times, and I will carry on raising awareness and donating plasma as long as I am told that my antibodies are at a high enough level to keep donating.

I am told each donation can give up to three coronavirus patients much-needed antibodies to help their body fight off the disease.

If my actions help save one more life or prevent others going through what I did, then I am doing my bit to give back for those that loved, cared and saved me on that very dark day back in March.

The NHS workers are my saviours, my angels and I am so thankful for what they did for me and my family.