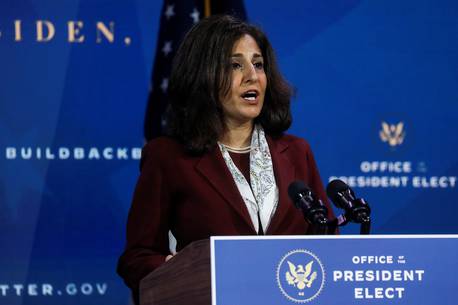 Neera Tanden, President Joe Biden’s nominee to head the U.S. Office of Management and Budget, apologized on Tuesday for past attacks on Republicans on social media, which have been a focus of opposition to her nomination from members of the party.

“I recognize the concern. I deeply regret and apologize for my language, and some of my past language,” Tanden said at her confirmation hearing on Tuesday before the Senate Homeland Security and Governmental Affairs Committee. She is due to appear before the Senate Budget Committee on Wednesday.

The Office of Management and Budget, or OMB, serves as the gatekeeper for the $4 trillion federal budget.

When Biden picked Tanden, chief executive of the left-leaning Center for American Progress think tank, in November, Republicans pointed to her past strong comments on Twitter, such as referring to Senate Republican Leader Mitch McConnell as “Moscow Mitch,” implying that he was working for Russia, or calling Republican Senator Susan Collins “criminally ignorant.”

However, now that Democrats control the Senate, with Vice President Kamala Harris able to break a tie, Tanden can get the 51 votes needed to become director of OMB even if she wins no Republican support in the 100-member chamber.

Tanden said that part of her role at the think tank was to be “an impassioned advocate,” but she knew directing the OMB would be different. “I understand, though, that the role of OMB director calls for bipartisan action, as well as nonpartisan adherence to fact and evidence,” she said.

Her hearing took place hours before the Senate was to begin the impeachment trial of Republican former President Donald Trump, who is accused of inciting the deadly Jan. 6 assault on the U.S. Capitol.

Tanden, who is Indian-American, would be the first woman of color to serve as director of the OMB.

She has been viewed as Biden’s most controversial nominee, attacked not just by Republicans but also criticized by some of the most left-leaning Democrats for being insufficiently progressive.

Democrats scoffed at Republican concern about Tanden’s past tweets. They called such concern hypocritical in light of the party’s support for Trump, who was known for blasting those he saw as opponents – particularly women – as “nasty” or criminals who should be locked up.

Introducing Tanden, Senator Amy Klobuchar called her “smart, organized and tenacious. Those are good qualities for this job.”

Tanden has been criticized from the left over her support for former Secretary of State Hillary Clinton rather than Senator Bernie Sanders during the 2016 Democratic presidential race.

Sanders has not said publicly whether he will support Tanden. But the senator, now chairman of the Budget Committee, is unlikely to have scheduled her confirmation hearing if he were strongly opposed to her selection.

A Sanders spokesman did not respond to a request for comment.