President Joe Biden speaks as Secretary of Defense Lloyd Austin and Vice President Kamala Harris accompany him at the Pentagon, February 10, 2021, in Washington, DC. - Harris and Biden are visiting the Pentagon for the first time since taking office. (Photo by Alex Brandon / POOL / AFP) (Photo by ALEX BRANDON/POOL/AFP via Getty Images) 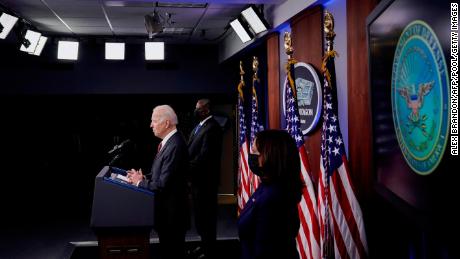 US President Joe Biden has announced the formation of a Pentagon task force to review the country’s China strategy.

Biden was accompanied by Vice President Kamala Harris, visited the Pentagon for the first time since becoming the president.

“Today I was briefed on a new dod-wide (Department of Defense) China task force that secretary Austin is standing up to look at our strategy and operational concepts, technology and force posturing and so much more. The task force will work quickly drawing on civilian and military experts across the department to provide within the next few months the recommendations to Senator (secretary, ed) Austin on key priorities and decision points so that we can chart a strong path forward on China-related matters.”

The US president announced that he has ordered an immediate review the country’s military-strategic approach to challenges posed by China. The new defence secretary Lloyd Austin briefed the president on how the US is prepared to deter China in the Pacific.

Last week, the US had moved its aircraft carrier USS Nimitz and its carrier strike group to the Indo-Pacific region as tensions between the two nations increased in the latter stages of Trump’s presidency.

The Biden administration is set to continue the tough approach on China on issues related to trade, regional security and human rights.

Last week, Secretary of State Antony Blinken had asserted that the US will stand with South Asian countries against China’s pressure. Blinken maintained that the US engagement in the region will continue.