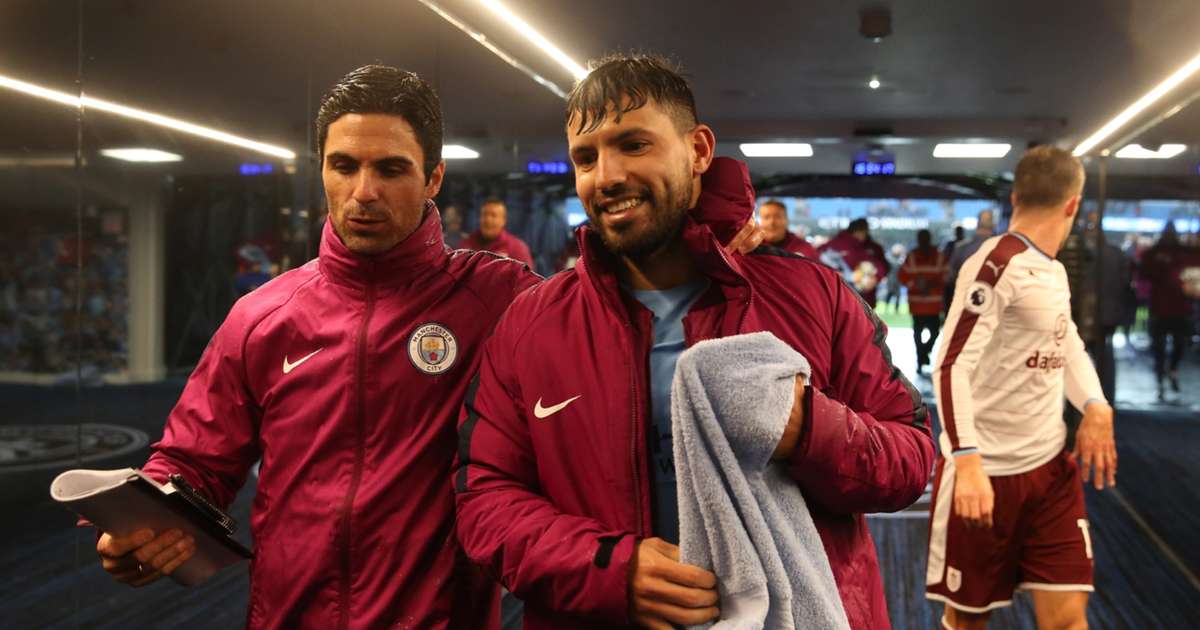 Mikel Arteta did not disregard the possibility of making a move for Sergio Aguero, who will leave Manchester City at the end of the season.

Sergio Aguero has been one of the “three main faces” at Manchester City, according to Arsenal boss Mikel Arteta, who did not rule out a move for the striker.

Aguero’s City career will come to an end at the culmination of the 2020-21 campaign, halting a 10-year stay at the club.

In that time, Aguero has helped City to four Premier League titles – scoring the goal which secured their first in the most dramatic of circumstances in 2011-12 – along with one FA Cup, five EFL Cups and two Community Shield triumphs.

The 32-year-old has struggled with injuries and COVID-19 this term, however, making just 14 appearances across all competitions, scoring three goals.

Arteta, Pep Guardiola’s former assistant, worked with Aguero for over three years between 2016 and 2019, and has hailed the Argentinian’s impact at City.

“Anybody that’s been close to him would say the same thing, he’s been the main face or one of three main faces to lift that project [at City],” Arteta told a news conference ahead of Arsenal’s clash with Liverpool on Saturday.

“You need quality to create moments to build a project and his is the biggest face.

“Not only the way he plays, but his charisma and character. It’s sad for him to leave but I think what he’s done he will be their history.”

Though denying he had called Aguero to discuss a potential switch to the Gunners, Arteta did not dismiss the suggestions of a move to bring the forward to north London.

“No, we will see what happens to him in the future,” Arteta said.

“Sergio has a unique quality to see spaces that nobody sees and score goals in an easy way so I’m sure he will find the right next chapter.”

One striker who has been linked with a move away from Emirates Stadium is Alexandre Lacazette, with the Frenchman’s contract up in 2022.

LaLiga leaders Atletico Madrid are among the teams previously mooted to hold an interest in the 29-year-old, who has netted 13 goals in all competitions this season, scoring on each of his last three Premier League starts.

It seems likely Lacazette will lead the line again on Saturday, given he has scored in each of Arsenal’s two most recent league games against Liverpool – the last Gunners player to score in three consecutive top-fllight games against the Reds was Robert Pires between 2003 and 2004 – and Arteta says the club will hold talks over a new deal at the end of the season.

|I’m always happy when people talk about our players and speculate – that means they’re doing well and getting attention from other clubs,” Arteta said.

“The situation with Laca we will address in the summer and speak to him and just propose the future that we want, and that’s it.

“Up to now I just want players focused and only focused on performing and getting the best out of them for the team.”

Should Arsenal decide to make a move for Aguero, then it may well be Lacazette who makes way, but would that be a wise move?

Lacazette is almost three years younger than Aguero, who has been besieged by injuries in recent seasons.

Since joining Arsenal at the start of 2017-18, Lacazette has made 122 Premier League appearances – 32 more than Aguero in the same timeframe.

However, Aguero has still scored more league goals, tallying 59 in contrast to Lacazette’s 48, though it must be noted City’s team of 2017 through to 2019 is widely considered as one of the finest attacking units of the Premier League era.

Lacazette has proved to be more creative, crafting 111 chances – 15 more than Aguero – though the duo are practically neck-and-neck for assists, registering 18 and 17 respectively.

Aguero’s big chance conversion rate is better than Lacazette. The Argentina international has scored 42 goals from 78 opportunities from which Opta would have expected him to find the net (53.85 per cent); Lacazette, in comparison, has scored 30 from 70 (42.86 per cent).