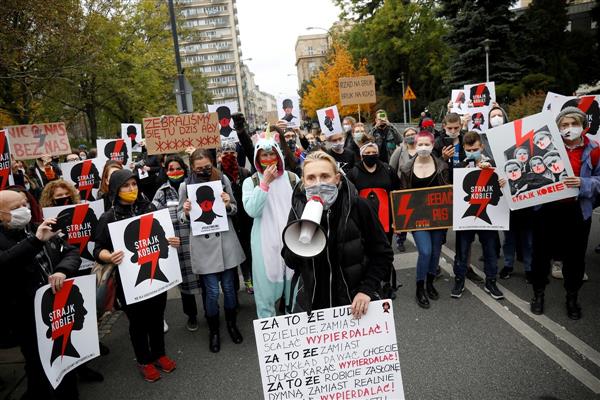 Protesters were planning to converge on Warsaw from across Poland on Friday for what police said would likely be the biggest demonstrations yet against a court ruling that amounted to a near-total ban on abortion.

“We expect these to be the biggest protests since the verdict,” Warsaw police spokesman Sylwester Marczak said. “Considering how big they can be, we always use the support of the police from other garrisons.”

Protest group Strajk Kobiet (Women’s Strike) said on its Facebook page that demonstrators would gather in three locations in the city centre at 1600 GMT.

The movement’s leader Marta Lempart told activists to report any attacks and to resist any attempt to prosecute or fine them for taking part. “We are doing nothing wrong by protesting and going out on the streets,” she told a news conference.

Prime minister Mateusz Morawiecki said this week the mass gatherings could cause more coronavirus infections and authorities have said they were planning to prosecute protest organisers on public health grounds.

Demonstrations have turned into an outpouring of anger against the ruling nationalist Law and Justice (PiS) party, with protesters blaming it and the powerful Roman Catholic Church for the ruling.

The Court decision on Thursday last week outlawed abortions due to foetal defects – ending the most common of the few legal grounds left for abortion in Poland and setting the country further apart from the European mainstream.

After it goes into effect, women will only be able to terminate a pregnancy legally in the case of rape, incest or a threat to their health.

The Catholic Church has said that while it opposes abortion, it did not push the government or the court to increase restrictions. It called for people to talk and refrain from violence this week, but declined to comment further on Friday.

Catholic anti-abortion group Ordo Iuris on Friday reiterated its support for the court ruling and opposition to the protesters, and called for calm.

“As an institute, we must condemn any violence, no matter in which way it is perpetrated. Nothing justifies hurting another person even in the face of such social unrest,” spokesman Maciej Grajewski said.

Poland’s ruling party leader Jaroslaw Kaczynski who as a Deputy Prime Minister is in charge of security affairs, said on Wednesday that the rallies were putting people in danger and opposition groups backing them would be held accountable.

On Friday, the number of daily new infections in Poland hit an all-time high of 21,629. The overall death toll rose to 5,351.